Yup, he did it! Wow, Weight Pulling is pretty darn fun! Jet did awesome. I’m really glad we trained for it a little bit beforehand, though. He understood the concept and was able to pull the big huge cart just fine.

UKC Weight Pull has a lot of rules which make weight pulling safe for the dogs. That made me very happy. And the judges and people helping out were super nice! They advised that Jet pull the big cart. Empty, it weighs 225 pounds. Jet weighed in a 26 pounds so he had to pull 8x that, which was 208 pounds, three days in a row, to get his UWP (United Weight Puller) title.

They had two carts, the smaller cart, I was told, didn’t move as smoothly as the big cart. The bigger cart had smoother axles (or something lol) and so they advised me to have Jet pull the big cart. So, never having done it before, I took their advice. And it worked out really well. Initially getting the cart to move is really the most difficult part. Once it was moving, Jet pulled it just fine and it just slid behind him.

I’m trying to embed the video into this post but it’s not working… so here’s a link to it if you’d like to watch Jet doing the Weight Pull:

Since he was pulling the empty cart so well, they said I should try Jet on some more weight. He successfully pulled 352 pounds. I didn’t have him do anymore (and they told me I shouldn’t) because, of course, we wanted Jet to end with a successful pull.

On Sunday, the third day of the UKC show, I also put Jet in Conformation. UKC has a fun title called Total Dog. If the dog places in Conformation (gets a win in competition, 1st through 4th place, and they have to place over another dog), and they successfully Qualify in the performance sport offered that same day, they get an award called Total Dog. So I thought, what the heck. I put Jet in Conformation since they have day of show entries. Jet already has his UKC Championship, but getting the Total Dog award would be fun! So Jet placed third in the terrier group out of 6 dogs on Sunday, and he Qualified in the Weight Pull, so he got his Total Dog Award on Sunday! What an awesome boy! I can’t tell you how much I totally adore Jet!

Something I’ve always wanted to try with my dogs is Weight Pull. Why, do you ask? Oh I don’t know… it’s just another fun thing to do. And I think it’s good conditioning for them for other sports… good weight training to build up their strength. I don’t want Jet to get too bulky, I just want him nice and tone.

So there is a UKC Weight Pull competition in November near by my house. And since there’s nothing else going on that weekend (rare, I know lol) I thought we’d give it a try. I also plan on putting Quinn in the UKC Conformation that weekend, if all goes well. Would be nice to get a UKC Championship on him in one weekend if possible.

So a local friend made Jet a Weight Pull harness and I hooked him up to my trolley in the front yard this evening to see how it’d go. She said that I’ll probably have to work starts and stops, and that is the truth. Once Jet got it going, he was okay, but getting it moving was a bit of a push for him. This cart has 3 17 pound blocks on it, and the cart weighs 25 pounds. I don’t know what weight the resistance of the grass adds, but it’s 76 pounds + maybe 20 for the grass? Jet was doing good, but he’ll need to pull 200 pounds (8x his body weight, he weighs about 25 pounds) for a Qualifying leg. And 3 legs for a Q.

So we have about 3 weeks to get him to pull 200 pounds… which, I think, maybe be a stretch! I’ll probably train every day, or every other day, for a while. some long and light loads, some shorter and heavier loads. He needs to pull 8x his body weight for 16 feet, in 60 seconds or less. No toys or treats on the lanes. So, this will be fun! Hopefully we’ll be able to do it! 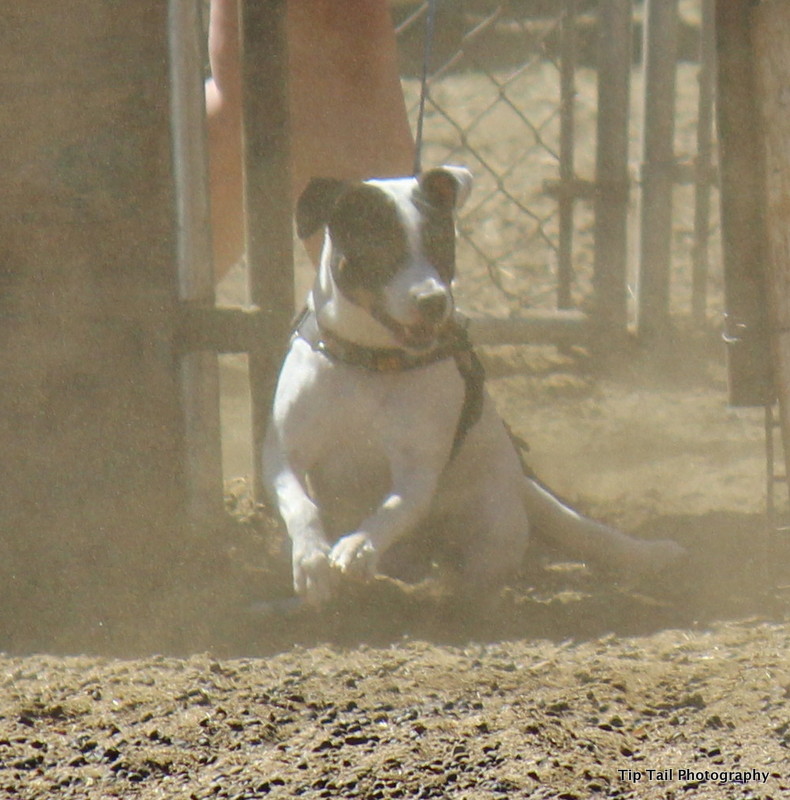 Well I went to dog camp the end of August, and had a great time again. I hope to go for two weeks next year, not just one. I’m excited. Since I’ll be retired, I should be more free with my time! Sorry I haven’t been posting much… but I thought I’d post about Jet and how wonderful he’s doing with herding.

At camp we went herding on Nigerian goats and some sheep. He did awesome. The goats were really heavy, so he was able to just walk behind them slowly and keep them with me. That was the most amazing herding I’ve ever done. I have only dabbled in herding in my life, mostly with my collie Levi, but I’ve always wanted to pursue the dogs sport of hearding a great deal more. So when I got back from camp, I decided I’d start lessons with a local herding instructor. So Jet and I are going to take herding lessons. We had our first lesson, and he did so well! He circled the sheep and changed directions and kept them with the trainer. When I stepped in, though, I was falling over my feet and I was a complete mess. So I have a lot to learn to get my feet under me and get into the right positions when I need to be.

These pictures are of Jet herding at camp. We went to Sheep Camp in Tahoe. Maybe we’ll even go back early next year and spend a few days with the instructors there.

Danish-Swedish Farmdogs are an amazing breed. Not only can they do agility, obedience, flyball, ratting, nose work etc… they can also herd. Myself and another lady are working towards getting the Farmdogs so we can compete in both AKC herding and ASCA herding. We can compete in AHBA. Though ASCA and AKC require a breed to be approved before herding in competition.

Jet is such an amazing boy, and I love herding with him!

Well, it’s August. I started to work at my current job on August 1, 1988. Wow, so long ago… and I can potentially retire at 25 years. Yesterday was my 24th year at my job. I started working in the welfare office, and now I’m a programmer… after going to school and getting a degree, but since I work for the same government, I get to keep all my seniority, leave benefits, and pension benefits.

The dogs, I think, will be exceptionally happy to have me home all the time! Above is a picture of three… Jet, Tatum and Quinn. Quinn doesn’t have a very good stay yet, gonna have to work on that for Camp. As we are heading to Camp Winnaribbun on August 25th, for a week of fun in the trees and on the beach! Though I will probably cry a lot, since I’ll miss Levi, and this will be the first trip without him. For some reason, my brain has flashes of planning for him… how he’ll do no the drive, how he’ll be with Quinn… weird stuff, just for a fraction of a second, then I have to catch myself and realize Levi is not going.

I still can’t take his name and put it on the Memory List in my right menu bar. It’s been four months since he died… and, actually, tomorrow, August 3, is one year since Lucy died. Ugh. I miss her very much, still. I miss Levi too. I still try not to think about them very much, as thinking about them just hurts. The below picture is me and my husband, with Lucy, Levi and Angel. All three are gone now. I miss them all. *sigh* (Okay, I moved him in the menu bar… and of course, now I’m balling like a baby again.)

But I do love my current family. They are wonderful, and they make me smile. So, one year to retire, then I can play with them every day!

Well Quinn and Jet are working things out. Quinn is a little resource guarder already, wants the toys and the food so we are working on that. Probably he learned it from his litter mates since he was the smallest of the puppies.

Chase doesn’t get to be around Quinn yet. And strangely enough, Muffit doesn’t really like him very much either. I thought Muffit would be more accepting. Tatum is starting to play with him once in a while, but still she mostly growls. But she growls at all the boys so that’s no different.

On a good note Jet is doing awesome at agility. We got our 16th and 17th Double Qs last weekend, and we are up to 423 speed points! I’m very excited. He’s doing such a good job, my Mr. Jet.

So nothing much new around here, except a puppy, who I’m trying to each how to sit… but his but doesn’t want to go down when I put a treat above his nose. 🙂 But we’re working on it. Been a couple weeks and I haven’t had time to do as much with him as I’d like. But that’s always the case, it seems. He’s a good sweet little boy and I’m glad he’s come to live with us.